Skip to content
Disclosure: This website contains affiliate links, meaning when you click the links and make a purchase, we receive a small comission with no additional costs to you. 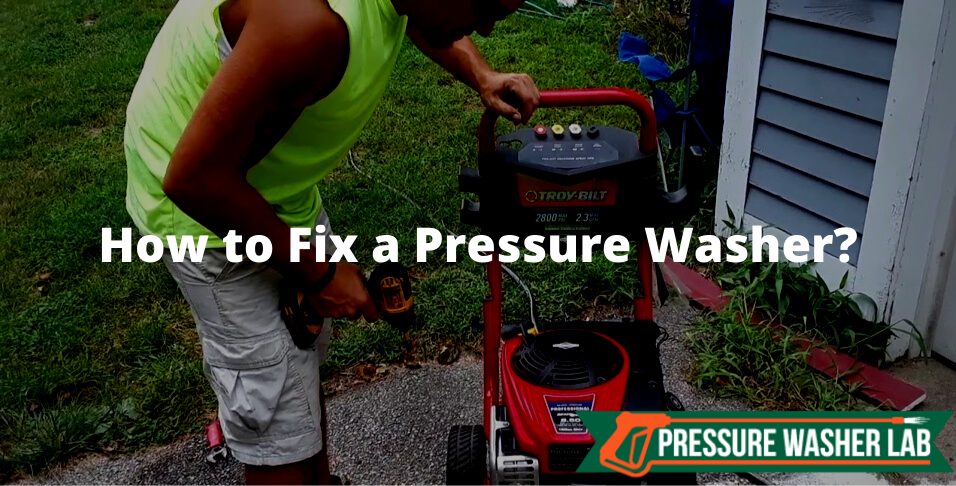 Fixing a pressure washer should start by identifying what caused the unit to malfunction, as each problem has to be addressed differently. Pressure washer issues can be related to the water pressure, water or oil leaks, the engine, increased noise, the detergent injector, and others. Repairing a pressure washer requires a set of tools and accessories, like screwdrivers, sockets and ratchets, Hex/Allen keys, wrenches, needle-nose pliers, and a utility knife.

How to fix a pressure washer based on the causes is detailed below. 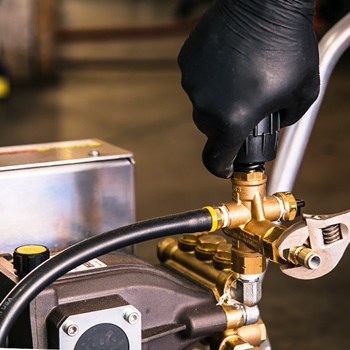 There are various problems that might occur with your pressure washer and you must know how to deal with them, especially if you don’t want to spend money on a professional. Whether you have a gas or an electric pressure washer, here are some troubleshooting examples for some very common problems.

There’s a reason why you purchased a pressure washer – to use the water that is sprayed with high pressure in order to get rid of any dirt or debris on various surfaces. When the unit lacks pressure, you can’t really use it at its full capacity. So, how do you fix this?

Well, oftentimes the reason for the lack of pressure could be dirt that accumulated in the pump. It lowers the pressure by blocking the nozzle, lance, or hose. If the nozzle is the issue, then you have to replace it. If it’s the hose, it may be the fact that it has kinks or the water is leaking somewhere. So, you will have to repair or replace the hose with a new one. Another possible scenario is that the water source is not fully open, in which case you don’t get enough water.

It’s also possible for a pressure washer to leak, and it’s actually a pretty common problem. When this happens, it may leak water but also oil and this is because some seals might be worn out. So, always check the seals regularly and if one has failed, you should replace it.

The pump assembly may also have to be replaced, especially if it’s a pretty old one and you have a tendency of using the pressure washer often. At the same time, if you have a newer pump assembly yet the unit is still leaking, you should consider replacing its pump seals or simply rebuild the assembly.

When your pressure washer won’t start, it may be due to a defective socket if you’re using an electric pressure washer. Try plugging the unit into a different socket to see if it still doesn’t start. If it doesn’t work, check out whether you are using the right type of extension cord. If the cord is longer than 25 feet, then it has to be a 12-gauge wire one to work with no issues. When gauges are lighter, they cannot give you the right amount of power to allow the unit to start running.

If you have a gas pressure washer instead, you should consider filling it with gas if it doesn’t start. Another problem might be a pressure build-up, in which case you have to squeeze the trigger gun. This will help release the accumulated pressure. There may also be a choke because of an improper position, in which case you will have to move it to the right one.

Last, but not least, the inability to start the machine may be due to a defective spark plug. So, make sure to replace it with a new one in this situation.

4. The Pressure Cannot Be Shut Off 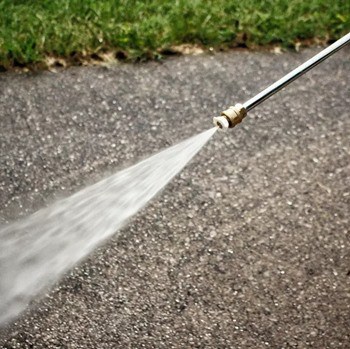 Can’t shut off the water pressure? If that’s the case, then you should consider stopping the engine and not use it anymore until you remove the unloader valve and replace it if it’s defective. It often happens that the unloader valve has a problem that doesn’t allow it to switch into bypass mode when you are releasing the trigger wand.

In reality, the unloader valve should react to the rise in pressure that occurs when the trigger wand is being released. It should also deflect the water flow that comes from the pump. As such, when it cannot go into bypass mode, the unloader valve will cause water to keep flowing out of the trigger wand, thus not allowing the pressure to be shut off.

This is why you should replace the unloader valve if it’s malfunctioning. Otherwise, the trigger wand may end up getting damaged.

More often than not, this issue occurs due to a discharge valve or inlet that is dirty. This is why you should make sure that you clean them and get rid of any dirt that causes the unit to pulsate. We recommend cleaning them after you use the machine 5-6 times.

The plunger may also be a possible cause if the valves and inlet are clean. Therefore, you should take a look at the plunger and replace it if it’s defective.

6. The Unit Is Running Rough

In general, when you have a pressure washer that starts running rough, one of the main reasons could be overheated water. This happens when you have a faucet that runs both cold and hot water.

If you want your unit to stop running rough, then you should consider using cold water. Bear in mind that even if you are only using a cold-water faucet, it’s still possible for the water that got trapped in the hose to warm up. This might also be a cause of this problem.

Another reason is when an inlet gets stuck, so there isn’t enough air entering it. So, make sure you check the inlet and fix it or replace it as necessary.

Lastly, the crankcase may have some damage that causes the washer to run rough, a common problem when you’re not using hot water. You should repair any damage in this case.

7. Unit Is Too Noisy

When too much noise is being produced, it could be because the engine doesn’t have enough oil, or because the water intake is blocked. If the latter is the issue, then clean it or replace it with a new one. If the former issue applies, just add some oil.

Also, there might not be enough oil in the unit’s pump. So, you should disassemble and look inside if possible. Add some oil and ensure no more noise is being made. If you can’t disassemble it, it’s best to return it under warranty if it’s still available.

Should You Always Open Up Your Unit?

If your machine is still under warranty, then disassembling it is not the right way to go. It would affect the warranty and you may end up having to spend money to fix a more severe issue. Try all the methods that don’t involve opening up your equipment and if they don’t work, then return it under warranty and have it fixed. 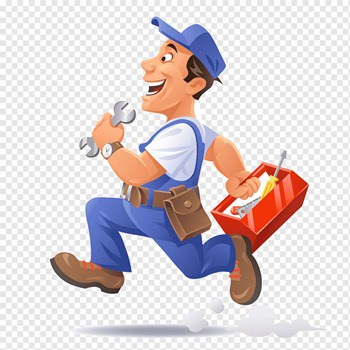 When you need to disassemble the unit and fix various issues, you need to use the right tools for the job. You can either get the individual tools or just buy a kit. Overall, the tools that will help you troubleshoot the issues include:

Pressure washers can have various issues, depending on the causes, the way you handle the device, the brand of the unit, and so on. It’s important to know how to troubleshoot them and save yourself the trouble of hiring a professional and spending more money. Hopefully, these tips will help you deal with the most common problems and fix them accordingly.

Adam Wallace is passionate about speed – he loves his motorcycle and adores his car. He knows that if you want your vehicle to love you, you gotta love it back – so he spends a considerable time pampering his rides. Nothing beats the sparkle of paint after a good pressure washing, so he decided to share his best tips and tricks here.